With two pavilions, one to promote Chile and the other for the agro-industrial businesses, our country has a presence in the first China International Import Expo (CIIE), the fair with which the Asian country seeks to show the world its economic opening. Chile was one of 172 countries, regions and international organizations from the 5 […] 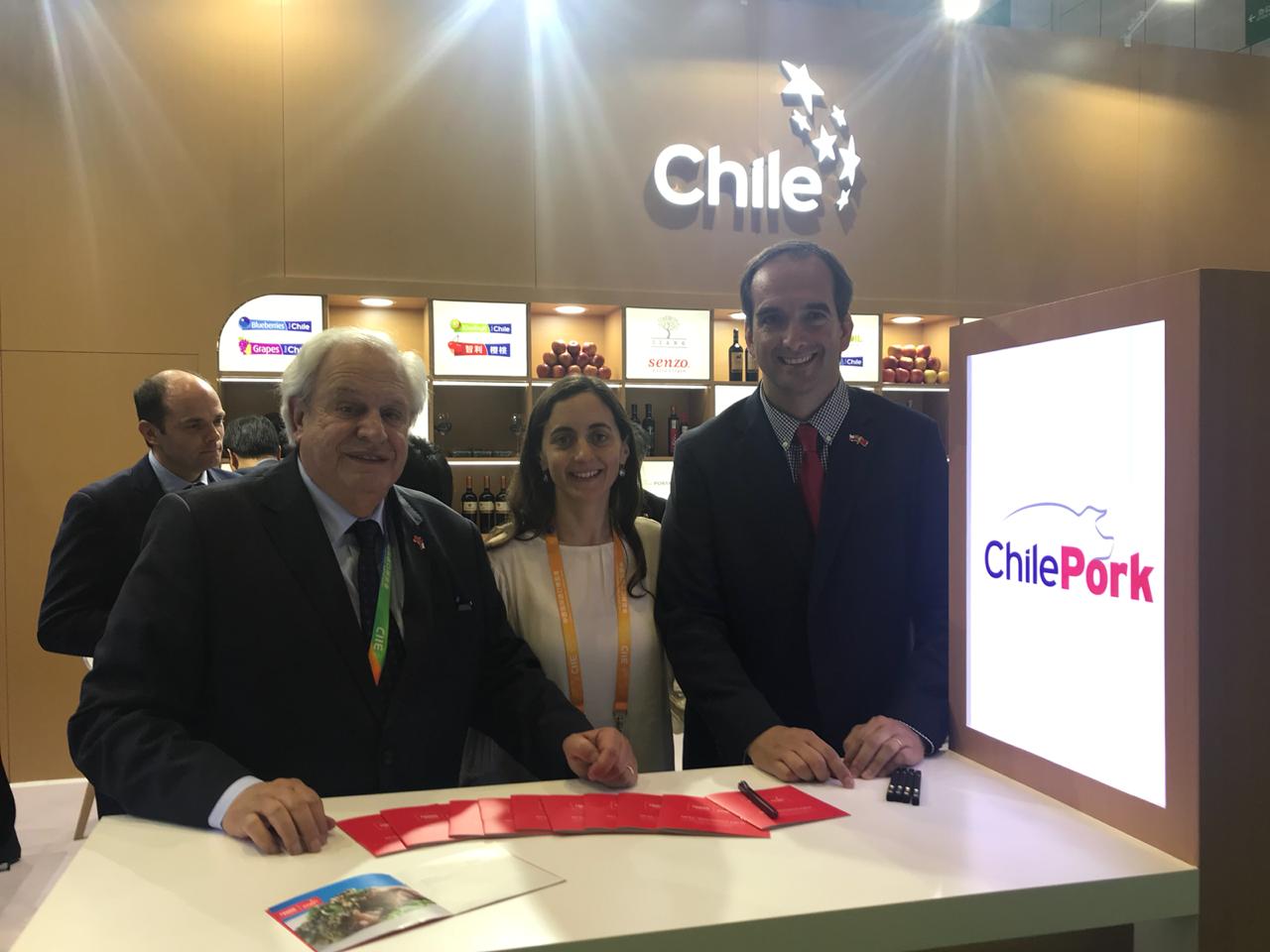 With two pavilions, one to promote Chile and the other for the agro-industrial businesses, our country has a presence in the first China International Import Expo (CIIE), the fair with which the Asian country seeks to show the world its economic opening.

Chile was one of 172 countries, regions and international organizations from the 5 continents invited to participate in this first version of the CIIE, which was inaugurated today by Chinese President Xi Jinping. In the ceremony participated the Minister of Foreign Affairs, Roberto Ampuero, the Minister of Agriculture, Antonio Walker, and the former President Eduardo Frei, along with the President of ExpoCarnes in charge of the ChilePork brand, Juan Carlos Domínguez and the National Director of the Service Agricultural and Livestock (SAG), Horacio Bórquez, in addition to 18 presidents and 39 ministers of other nations.

Under the slogan, “A new era, shared future”, more than 400,000 buyers from China and abroad that were invited by the Chinese government, will participate in this event.

Chile, with its two pavilions, seeks to continue increasing its presence in the market and capture a high percentage of the more than 30 trillion dollars in goods imports and 10 trillion in purchases of services that China forecasts for the next 15 years.

“It is an honor for Chile to participate in the first edition of the China International ImportExpo fair. Chile and China, despite the 19 thousand kilometers that separate us, are closer than ever. China is our main trading partner, the second destination of our non-copper and food exports, and this week we just completed ChileWeek China in Beijing, to continue strengthening that relationship. We are honored and grateful to the Chinese Government for having invited us to this space, “said Foreign Minister Roberto Ampuero, at the inauguration of the Chilean pavilions and food at the CIIE.

ProChile was responsible for designing and coordinating the participation of Chilean food and beverage companies in the food pavilion at CIIE. A space of 100 square meters where five sectorial brands, ChilePork, Wines of Chile, Chile Olive Oil, Fruits from Chile, Avocado from Chile, together with about 20 associated companies, will carry out promotional actions such as tastings of products, cooking show, and business meetings.

Juan Carlos Domínguez, President of ChilePork, commented that: “This Fair allows us to continue making Chilean Pork known, recognized for its quality and nutritional contribution. There are still many business opportunities in China and what better way to do this, than allowing the people to get to know our products firsthand “.

For 9 consecutive years, China has been the second largest importer of goods, and this year is celebrating 40 years of its economic opening. In view of this and in the framework of Chile’s participation in the CIIE, the director of ProChile, Jorge O’Ryan, signed a cooperation agreement with Win Chain, the supply and sourcing platform of the Alibaba group. The agreement seeks that fresh Chilean products arrive and be marketed in a better way in the group’s supermarkets, such as Tmall, Rt mart, Auchan China, Lianhua and Hema.

“China recognizes us as a reliable supplier of good quality agricultural products, today our strategy in China aims to diversify our channels of trade, especially targeting E-commerce that today in China accounts for much of the consumption of imported fresh foods, especially among consumers with higher incomes,” said the authority, adding that” in this ChileWeek China, and especially in Shanghai, we have concentrated on forging strategic alliances that will allow us to reach more consumers and in better conditions with our products. Yesterday we signed an agreement with China Eastern that will allow fresh products to reach markets in just 3 or 4 days, thanks to the new direct route between Santiago and Nigbo. Today we sign with the largest distributor of fresh products from China, all of this for local consumers to enjoy our flavors and keep fostering our business relationship. ”

The country’s pavilion of 152 square meters was designed by the Image Foundation of Chile and presents our country under the concept “Chile, where the exceptional becomes an opportunity”, highlighting our national territory’s exportable offer and its benefits. This includes the advances and leadership in Non-Conventional Renewable Energies (NCRE), the best from our goods and services, our geographical diversity, potential investments, and tourist attractions.

This space will attract visitors with activities such as wine tastings, folklore shows, and Easter Island dances, talks by members of the ChileGlobal network, the launch in Chinese of the Investor’s Guide by InvestChile, and photographs of the products and touristic places. Furthermore, the new app, Chile 360º, will be available to generate a powerful experience on more than 100 of the best destinations and national landscapes.