This year marks 125 years of diplomatic relations between Japan and Chile, and 15 years since the signing of the bilateral Strategic Economic Partnership Agreement, milestones that have built trust between both countries in politics and business, while helping Chile progress and grow. Therefore,  ChilePork and Wines of Chile, with the support of ProChile (the […] 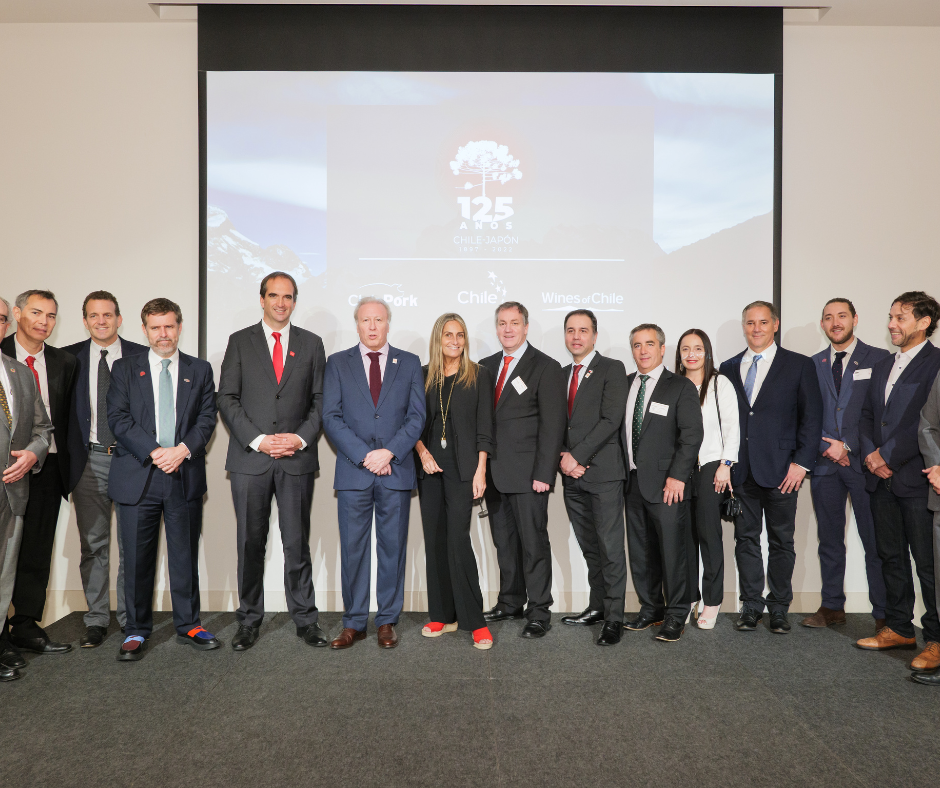 This year marks 125 years of diplomatic relations between Japan and Chile, and 15 years since the signing of the bilateral Strategic Economic Partnership Agreement, milestones that have built trust between both countries in politics and business, while helping Chile progress and grow. Therefore,  ChilePork and Wines of Chile, with the support of ProChile (the Chilean Exports Promotion Bureau), returned to Japan in person on October 13th to hold a series of joint activities to help position Chilean pork and wine in that market.

There was a cooking master class for 20 executive chefs from Japan’s most prestigious hotels, a press conference with 10 trade media outlets, a wine master class where more than 50 importers tasted products from 8 Chilean wineries, a seminar about pork’s global economic scenario for 80 importers, and a networking event where over 150 pork and wine importers tasted delicious Chilean wine and pork in addition to doing business.

Juan Carlos Domínguez, President of the Chilean Meat Exporters’ Association, ChileCarne, which also manages ChilePork, the brand created to promote pork internationally, explained: “After three and a half years, we resume ChilePork’s in-person activities in Japan, and what better occasion to do so than to celebrate 125 years of diplomatic relations between Chile and Japan. Support from the Chilean Embassy and ProChile was key to the success of the four activities we carried out in Tokyo. We also worked together with Wines of Chile for the first time, raising the events’ profile and appeal to chefs, journalists, and our importers and distributors here in Japan. We were also joined by executives from Chilean pork exporting companies. In summary, it was a great success, which also coincided with the ratification of the CPTTP by the Chilean Congress, which will help us stay competitive and keep delivering our products to Japan, one of the primary destinations for Chilean pork.

Chile’s Ambassador to Japan, Ricardo Rojas, stressed that: “The relationship between Chile and Japan is one of the most important for our country. Not only because it is one of our main foreign investors and export markets, but also because we share common values in our foreign policy.” The Ambassador also celebrated the success of the event: “Thanks to wine and pork, Chile is increasingly well-known in this country. Events like this help deepen and enhance this relationship.” In 2021, Japan was Chile’s fourth largest trading partner, with more than 9.4 billion USD in trade. Chile exported 7.3 billion USD, a 14% increase from 2020 and representing 8% of the country’s total exports. By July 2022, Chile continues to rank fourth, with more than 4.4 billion USD exported, a 13% year-over-year growth and 7% of all exports.

Paulina Valderrama, ProChile’s Acting General Director, added: “Our products are well positioned in Japan thanks to our high standards of quality, traceability, food safety, sustainability, flavor, and origin. Japan is the third largest destination for our agri-food products, with 1.1 billion USD in exports as of August 2022. We are still focused on growing this important market that offers numerous opportunities for our exporters with joint public-private activities. This event organized by sectoral brands, with ProChile’s support, helps showcase the attributes of each product while promoting Chile’s image in Japan.”

“We are pleased to be celebrating 125 years of diplomatic and trade relations with Japan with such a well-attended event that shows the quality of Chilean wine and our Sustainability Code, which certifies our sector’s commitment to environmentally responsible production,” said Angélica Valenzuela, Wines of Chile Business Director. “Chile is Japan’s third largest supplier of bottled wine, after France and Italy, and our mission is to keep growing in both volume and value thanks to activities like today’s, which undoubtedly left a great impression among importers, distributors, and the media,” she concluded.

Every day, 12 million people across the world eat a serving of Chilean pork, a large share of whom are in Japan, Chile’s third largest importer. They also enjoy Chilean wine, salmon, trout, sea urchins, grapes, and fresh lemons. This is because for demanding countries like Japan, Chile is a reliable supplier of healthy and safe food. Currently, Chile has 31 trade agreements with 65 economies (the EU, China, the US, Japan, South Korea, Australia, and Latin America, among others), and holds a prominent place on the podium of food producing and exporting countries. Built over the last three decades, this open-market trade policy has been decisive for Chile’s exportable food offer to successfully penetrate international markets.

Chilean food exports have grown steadily over time, surpassing 18.4 billion USD in 2021, a 9.5% year-over-year growth, and represent 18% of Chile’s total exports. Currently, the leading agri-food sector in Chile is fruit; followed by salmon, wine, and meat in fourth place. Pork is the most exported meat with 56% of the total.